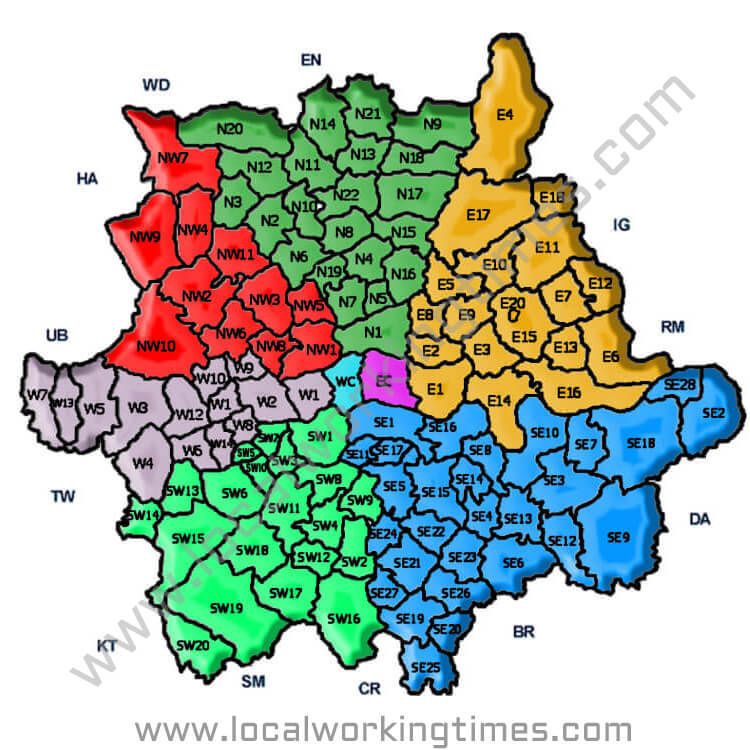 Postcodes are really important for the people of London. Location is one of the main factors of house prices and many people living in London would be willing to pay above average to get a respectable postcode. People have been boasting about how respected their postcode is by the upper class of London for decades now. Let’s learn more about where do the roots of this postcode system go and who is responsible for its position today.

The History of London Postcodes

At the time of their invention postcodes were a necessity as delivery services weren’t effective and addresses were vague. The reason for that situation was the sudden increase in population. People started to build accommodations in an unorganised way which gave rise to the need for a neatly ordered system. At the beginning of this address reform, 100,000 houses were renumbered and 4,800 areas got themselves new names.

However, these efforts did not solve the problem. Seeing that the situation was not getting any better, a former teacher decided to give a hand to find a solution and he made a plan which divided London into 10 different postal districts. That man’s name was Sir Rowland Hill and his system was based on compass points. Each district had its own office and none of them were further than 12 miles from central London. Sir Roland didn’t stop there and he became the Secretary to the Postmaster-General in 1846. This gave him even more authority to keep making reforms until his retirement in 1864.

The improvement was undeniable and it reached its peak between 1857 and 1858 due to Hill’s planning. The initials of everyone’s districts were added to the end of their addresses which made it possible to distribute them in the local office without the need to take them all to the Chief Office in the centre of London first. In 1866 the districts went through a little bit of change due to the results of a survey conducted by Anthony Trollope, who made his way to become a revered novelist later, and North East region got merged with the East district.

The postal revolution of London led to many facilities and a lot of other major towns like Manchester and Sheffield decided to apply similar changes themselves like adding the number of the geographical district after the town name. This system was altered one more time in order to help the women who took the sorting duties of men in World War I.

Women were not experienced at such a job, so authorities tried to simplify the system further and in order to do that, they added sub-districts that all had a serial number. For instance, E1 was used for the Eastern District Office, E2 was for Bethnal Green, E3 for Bow, and so on so forth.

Of course, this made things a little clearer but it still was not a job for the uninitiated because of the issue that arose from the incongruity between district and borough boundaries. Also, when they looked at the map, the numbering seemed sort of random at first glance. For instance, NW1 is located near central London but NW2 is nowhere near there. Of course the numbering had a system though. It was based on the alphabetical order of the district they represented. Also, as expected, the city didn’t stay the same way it did when the numbering was introduced and this caused unusual codes like EC1A 1AA.

Sadly, the sources of confusion did not end there. Some London areas were still using the postal addresses of the county they formerly belonged to. For example, people in Sutton used to write “Sutton, Surrey” and they didn’t change that to “Sutton, London” even after Sutton was transferred from the boundaries of Surrey County Council. The fact that some of the postal districts cross even regional boundaries didn’t help the confusion issues. For example, the KT postcode included areas in Greater London as well as the South East Region.

This form of the system was used until the technological developments in the early 1960s which caused a drastic change: a mechanisation programme. Manual workers were replaced by machines all throughout the nation and postcodes were changed into codes in phosphor dots that were read by the machines and printed on the envelopes. Croydon was the first to switch to the present postcode system in 1966 and the development of this system was completed with the recoding of Norwich in 1974.

The mid-eighties were the time that provided a base for the current mail sorting system with the introduction of an Optical Character Recognition (OCR) system. This system allowed machines to automatically read the printed addresses that contain the postcode and convert them into the accurate phosphorescent dots which are later printed on the envelopes. It is a lot faster than the system that was used previously as it removes the need for an operator that keys in the postcodes manually. The processing system was completed with the help of the Integrated Mail Processors in 1997. Currently, one machine is enough to guide a mail from the Mail Centre to the house that is waiting for it.